“Almost two thirds of people admitted to the National Problem Gambling Clinic are suffering from habits exacerbated by games terminals found in all of Britain’s 8,500 betting shops, The Times has learnt.” 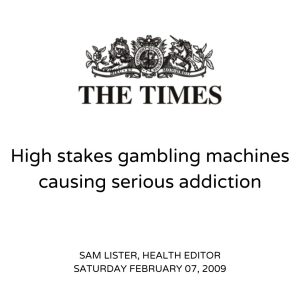 “Henrietta Bowden-Jones, a consultant psychiatrist who set up the gambling clinic, said that the evidence of habits emerging from the flood of referrals emphasised the importance of NHS involvement. Until now, gambling treatment has been offered by self-help groups, charities and private clinics that are beyond the limited budgets of most problem gamblers.

We are building up the first proper evidence-based data set, which can show the triggers and levels of addiction, the spend, the frequency and the negative consequences,” she said, adding that she intended to publish a full audit of findings later in the year.

We were not really prepared for the level of demand for the service,” Dr Bowden-Jones said, adding that the main cause of gambling problems appeared to be FOBTs, online sites and race betting. “A lot of people who start off betting on horses and dogs, and have started to develop a problem, have migrated to FOBTs and online sites. It’s the immediacy of the gratification, the cycle of excitement. It is the way the machine taps into the reward pathways of the brain. Games like roulette are what people are becoming really addicted to.

I have people coming into my clinic who have not eaten properly for months. They are emaciated because they are on such tight food budgets because of their debts.”

Dr Bowden-Jones, who is to join a government gambling strategy board, said that most referrals — of which 60 per cent were self-referrals — were from men aged between 18 and 75, including many successful professionals. The clinic hopes to reach out to female gamblers, who were under-represented among referrals so far.”