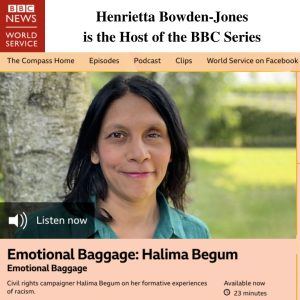 BBC: “Halima Begum is the CEO of the race equality think tank The Runnymede Trust. Her career as a civil rights campaigner began when she formed Women Against Racism in 1993, which was forged by her experiences of being racially abused by the National Front every day she went to school in East London. She reveals just how her mother coped with the threats that the family received on a daily basis. And it how it contrasted sharply with the welcome and love that Halima received from the teachers in her local school.

Her parents had already known conflict in their homeland, as Halima was born two years after the brutal civil war between Bangladesh and Pakistan, which traumatised many Bangladeshis. She tells psychiatrist Henrietta Bowden Jones how those experiences have shaped her life and opinions.”