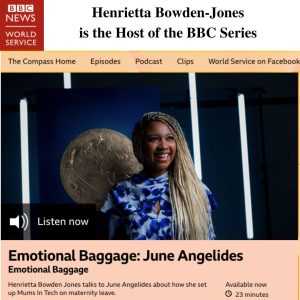 BBC: “Psychiatrist Henrietta Bowden Jones talks to June Angelides about how she set up Mums In Tech on maternity leave, and how she was inspired by her entrepreneurial family in Nigeria, and particularly by her late grandmother. June reveals why she gave up a good job to set up the first coding academy in the United Kingdom for young mothers. And talks about the stress it caused but also knew that the time was right for her to do this.

June followed in the footsteps of her uncle Ben Murray Bruce, who built the first multiplex in Nigeria and went on to become a senator. For her services to women in technology, she received a MBE in 2020. But it was not always easy growing up in Nigeria, with regime changes and sporadic rioting, as well as living with the fear of home invasion.”