Henrietta Bowden-Jones in conversation with Christina Lamb, Chief Foreign Correspondent at The Sunday Times and one of Britain’s leading foreign journalists and bestselling author.  She discusses her work across her career as a foreign correspondent and reporting trauma from Afghanistan to Ukraine. 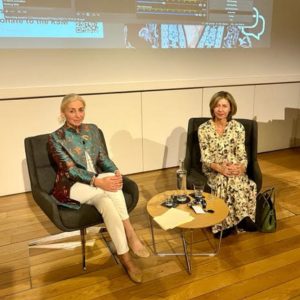 RSM: “Christina Lamb has reported from most of the world’s hotspots starting with Afghanistan after an unexpected wedding invitation led her to Karachi in 1987 when she was just 21. Her despatches with the mujaheddin fighting the Soviet Union saw her named Young Journalist of the Year within two years. She has since been awarded Foreign Correspondent of the Year five times as well as Europe’s top war reporting prize, the Prix Bayeux, and was recently given the prestigious Lifetime Achievement Award by the Society of Editors.

She is the best-selling author of ten books including Farewell Kabul, The Africa House, and The Sewing Circles of Herat and co-wrote the international bestseller I am Malala with Malala Yousafzai and The Girl from Aleppo with Nujeen Mustafa. Her last book Our Bodies, Their Battlefields about sexual violence in conflict won the first Pilecki Institute award for war reporting and was shortlisted for Britain’s top non-fiction award, the Baillie Gifford Prize, as well as the Orwell Prize and the New York Public Library Bernstein award. It was described by leading historian Antony Beevor as ‘the most powerful book’ he had ever read.

She is a Fellow of the Royal Geographical Society, an Honorary Fellow of University College Oxford, an International Board member of the Institute for War and Peace Reporting, an Associate of the Imperial War Museum, and was made an OBE by the Queen in 2013. Her new book The Prince Rupert Hotel for the Homeless is her first in her own country.”